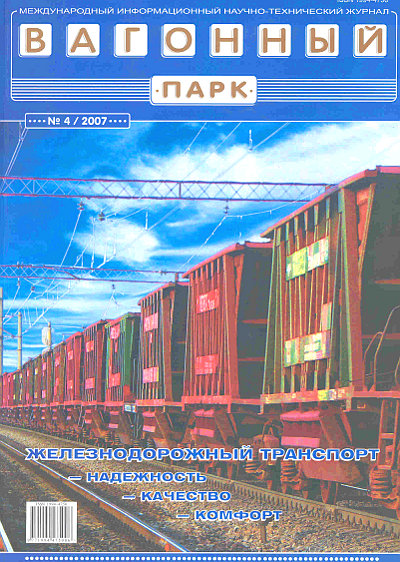 A large number of publications have been devoted to the investigation of the characteristics of the absorbers' work. The authors consider circuit and constructive solutions, working processes, test methods for absorbers .

Studies carried out by the authors using modern diagnostic equipment made it possible to establish a number of significant shortcomings peculiar to the absorbers used at Ukrzaliznitsy. In particular, they include the lack of a valve-throttle control system.
The quality of the absorber in this case depends on the precision of manufacturing the elements of the entire structure. Dampers, as a rule, have a significant asymmetry in compression and tension, and this, especially at high speeds, can cause in the truck an alternating load, which contributes to the appearance of fatigue cracks.
At present, mostly obsolete testing equipment is used, which does not allow differentiating the real values of the resistance and velocity parameters on the compression and expansion paths, and also to evaluate the influence of the temperature factor associated with the viscosity of the working fluid.
Since there is no filtration in the closed hydraulic system, wear products of cast-iron piston rings with high intensity lead to a change in the primary parameters of the absorber.
The operating temperature of the absorber is in the range from -30 ° C to + 60 ° C. In this range, the resistance parameters due to changes in the viscosity of the oils change by up to 40%.
The imperfection of the structures of the absorbers is manifested even in the fact that when the head of the absorber is rotated and the shock absorber cover is lightly struck, the shape of the diagram and the control parameters of the resistance and velocity along the compression and tension moves, as well as the symmetry index, change significantly.
Disadvantages are also manifested in the fact that when stored, transported in a horizontal position or close to it, the oil level in the recuperative chamber does not block the throttling holes. This contributes to the emergence of an air cushion in the rod cavity. As a result, in the initial stages of the absorber's operation, shocks, shocks, and so forth occur.
Diagnosis of the technical state of the absorber by the end of the overhaul period requires special bench equipment. As a rule, stands are used that specify the movement of the rod of the hydraulic cylinder of the absorber according to the harmonic law. According to the experimentally obtained dependence of the force on the rod, their characteristics and deviations from the nominal values are determined.
Text of the article:
zhd-article.pdf 322 Kb
Source:
https://minetek.donetsk.ua
Тип статьи:
Copyright
функциональное обеспечение испыт
1838
Администратор