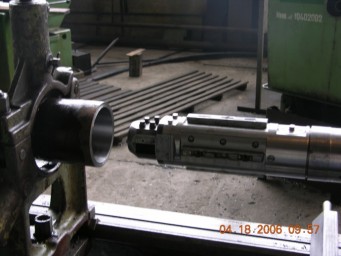 Rolling cylindrical holes is a method of finishing processing based on cold, thin plastic deformation of the surface layer of the metal of the workpiece. At the same time, the treated surface is strengthened (the main distinguishing feature of rolling) and the surface roughness decreases. Rolling holes is done on turning, drilling, horizontal boring and special machines with ball or roller plates. The hole for rolling is processed by boring or deployment. The processing allowance is 0.04 and 0.1 mm., The peripheral speed is 40 ... 250 m / min, the feed is 0.2 ... 0.5 mm. Rolling holes on radial drilling machines is performed when installing rolling in the spindle, and the detail on the table of the machine. On turning and revolving machines, the part rotates with the spindle, and rolling makes reciprocating movements. With the greatest technical and economic effect, rolling is used when machining large-diameter holes in heavy body parts, the abrasive treatment of which is difficult. The diameter of the hole after rolling increases by 0.02-0.03 mm, the hardness of the surface layer increases by 20 ... 50%, and therefore the wear resistance increases by 1.5-2 times. Rolling can be applied to holes of any diameter and length, both through and deaf. Rolling can be done without the use of coolant, and with the use of industrial oil or sulfofresol. When rolling with rollers, the most favorable results were obtained when the allowances for diameter were 0.03-0.06 mm, and when rolling with a ball, to 0.2 mm.

To prevent jamming of the rolling in the hole, the rolling should be strictly centered with the axis of the hole. Therefore, it is recommended to roll out immediately after machining with a cutting tool without reinstalling the part, and at the same time, the hole should be thoroughly cleaned from chips. The peculiarities of the process of rolling with ball rollers, in comparison with rolling roller rollers, are the absence of forced rotation of the ball, its self-installability relative to the hole and, as a result, the absence of sliding. If it is necessary to obtain surface hardening in order to reduce surface wear, rolling is applied with a roller. Rolling out is a more productive method in comparison with other types of hole finishing. Rolling treatment can be used after bulk quenching, high-frequency hardening, nitriding, and cementation of products. Rolling holes and machining outer surfaces with rollers and balls of spherical surfaces and parts, through and blind holes, deep holes, is widely used in repair production to restore the mechanical properties of parts.

Awards
Our awards
Администратор 5 years ago

Products and technologies
Администратор 5 years ago