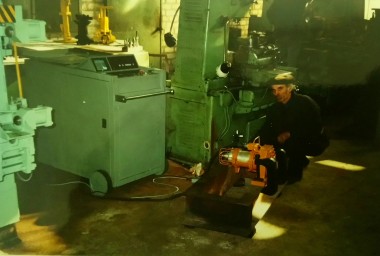 Unfortunately, not many engineers and technicians know what residual stresses are in metals. And even more so, not many people know how to deal with this.
However, ignoring the existence of such a physical phenomenon as residual stresses can lead to multimillion-dollar quality losses in production and sometimes to disasters.
And so, let's start with the basics.

We will consider residual stresses in a macro volume or residual stresses of the first kind
Speaking of allegories, the residual stresses in metals are explained by a certain curvature of their crystal lattice.
When can they occur? In the transition from liquid to solid - castings. (For example castings of beds, gearboxes, etc.). When welding metals. During machining (removal of stock from the workpiece).
What could be the consequences of exposure to residual stresses?
The most common effect of residual stresses is warpage of the product.
Consider a specific example:
For example, you made a casting of a large gear case (steel or cast iron). And after that you need to bore the holes for the shafts.
You bore holes for the gearbox shafts on a boring machine, gave the body to the assembly, and there it suddenly turns out that the holes are not aligned.
The first thing that comes to the mind of masters who do not know about residual stresses is the idea that the borer screwed up when processing holes.
But in most cases, the cause is residual stresses, which constantly strive to bring the crystal lattice of the material to an equilibrium state.

How can one deal with the consequences of residual stresses? Yes, very simple.
There are three main technologies for stabilizing residual stresses in casing, welded, cast products:
1) natural aging
This is when, after receiving the workpiece (casting, forging, welded structure, etc.), we spread it in the open air and wait 2-3 years until the part relaxes itself.
The disadvantages of this method are huge timelines. Not every manufacturer can “freeze” such a quantity of working capital and work at a warehouse of blanks.

2) annealing
the part is subjected to low-temperature heat exposure - annealing.
I must say that this method has almost the same disadvantages, but sometimes it is simply irreplaceable. For example, when it is necessary to stabilize residual stresses in hard parts (forging, casting cube 1m x 1m x 1m, etc.). Cons: thermal furnaces are needed, sometimes very large, if the part is large. Energy is very expensive. The annealing process lasts about a day. But most importantly, low-temperature annealing significantly reduces the cyclic endurance of the product. This is very critical, for example, for welded frames of bogies of electric and diesel locomotives, where the product must withstand a certain number of alternating loads during operation. This method is morally obsolete and extremely disadvantageous either economically or technologically.

So what then remains for the manufacturers?
There is another method that goes back to the 70-80s of the last century, when the two largest scientific schools were born and competed on the world stage - this is the scientific school of the Ukrainian academician Kolot Vladimir Aleksandrovich, who in turn was a student of one of the most famous scientists -technologists - Belarusian academician Yasheritsin Pyotr Ivanovich, and the American scientific school of the company Marting Engineering. In this competition, the academic school of Kolot took the championship. In 1989, at an international technological exhibition, the young Ukrainian scientist Kolot Vladimir Aleksandrovich introduced the world the first computerized installation with the possibility of automated vibration-resonance stabilization of residual stresses in welded and cast body parts weighing up to 150 tons. Then the installation was awarded the "Gold Medal" at the exhibition, for a technological breakthrough.
In this installation, even the computer and the operating system on it were of their own design, in which employees, students and graduate students of Vladimir Alexandrovich took part. Immediately at the exhibition, more than a hundred contracts were signed for the supply of this high-tech equipment, which had no analogues in the world. At the same time, the installation cost at that time was 150,000 gold rubles, and the ruble was then more expensive than the dollar.
The Americans then lagged behind us for 4 years. Only after 4 years did they have their own computerized installation and their own patent.
But while Vladimir Aleksandrovich was a world-famous competitor in the technology of stabilizing residual stresses, in the field of application of the technology itself, Vladimir Alexandrovich went further and developed the technology of vibrational resonance dressing of non-rigid parts. This direction of the academic school of academician Kolot Vladimir Alexandrovich is the only one in the world to this day. No one else knows the technology of vibroresonant dressing of non-rigid products. Such technology corrected warpage of 2-meter welded shells of large electric motors, corrected warpage of 18-meter propeller shafts of submarines after their machining, etc.
Below is a training film explaining the essence of the technological process and the developed installation. To date, the enterprise, founded by academician Kolot Vladimir Aleksandrovich, already produces 5th generation installations, on a modern elemental base. But the "museum" exhibit of the very first installation was also preserved in working condition.