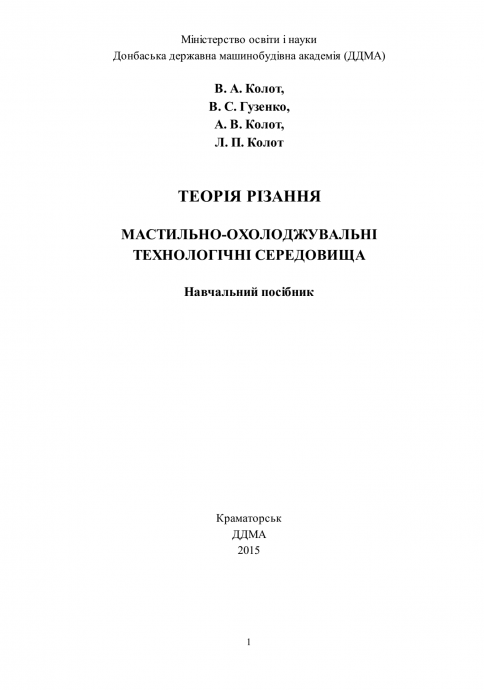 The effectiveness of metalworking is a complex indicator that takes into account among other conditions the role of lubricating and cooling technological environments (IOTS), their impact on product quality, productivity and other technical and economic indicators of the processes of cutting metals. Modern IOTS is an integral part of the whole range of facilities, which ensures the efficient operation of the metal cutting equipment. Since in the practice of metalworking conditions of cutting are significantly different, then, accordingly, a large number of IOTS is used. Naturally, such issues as the designation, classification and physico-chemical bases of the IOTS require special attention and should be carefully considered in the first place. The most important of these are the requirements for ensuring the increase of the stability of the cutting tool and improving the quality of the surface to be treated with the given accuracy of the surface to be treated. The fulfillment of these requirements leads to a reduction in the cost of metalworking as a result of reducing the cost of the cutting tool, reducing the shortage and downtime of the machine tools associated with replacing the blunt instrument. Depending on the conditions of treatment, IOTS should provide lubricating, cooling, dispersing or washing action. However, in most cases, it is necessary to provide several steps at a different level from the IOTS.

The first section deals with the general purpose and functional effects of IOTS during mechanical cutting of metals, the classification of lubricating and cooling technological environments; assortment and general scope of IOTS application. The effectiveness of the use of IOTS depends largely on the conditions of their application, which may include the method of placing the IOTS into the cutting zone, the methods of activation (the method of chemical or physical impact on IOTS in order to increase their efficiency).
The second chapter examines the basic principles of choosing IOTS during blade processing. The technical requirements for the performed cutting operation, the property of the machined and tool materials, the design features of the cutting tools and the level of cutting modes largely determine the choice of IOTS for each operation.
The third section deals with the selection of effective IOTS for grinding, which are determined by the material processed, the precision of the processing of the part and the quality of the surface layer, cutting modes and the characteristics of the abrasive materials.
Source:
https://minetek.donetsk.ua
Тип статьи:
Copyright
lubricating technological enviro
1997
Администратор